Print them outand put them up in your town

On behalf of the Ukrainian community
of cultural influencers we are calling on you
to support our fight against
the Russian aggression.

Russian culture is expansionary and imperialistic in nature. For generations it has nurtured superiority over other nations which were first subjugated by the Russian Empire and later by the Soviet state. The Russian Federation has chosen to continue this unfortunate practice. Nearly all Russian culture continues the tradition of Russian imperialism mainly due to the fact that Russia’s expansionist policies have never been condemned and publicly denounced. This is one of the key narratives supporting Russia’s invasion of Ukraine—an action supported by the majority of the country’s population.

Help us fight the Russian Empire
by cancelling its colonialist culture.

Withhold any funding, support, or even attention you once provided to Russian artists, writers, or musicians. There should be no room for their exhibitions, publications, or concerts. There should be no mention of them in the press as long as Russian soldiers are obliterating our cultural heritage, removing Ukrainian books, and forcing Ukrainian children to learn the Russian language and literature in the schools of occupied Ukrainian towns.

is the motto of the European Union. Russia's motto may be: "Unity in conformity. Russian world—for the whole world." Anything they consider not “Russian” has long been seen as unworthy, inferior and corrupt. Today is the time to restore visibility to entire nations crippled by Russian imperialism.

Russian culture today is nothing more than the result of long-term theft of subjugated cultures by the state. Decolonisation of Russia is impossible without the complete cancellation of its culture. After all, under the guise of culture as “soft power” in its most diverse manifestations, Russia has exerted and continues to exert authoritarian pressure across the world.

Shift your focus
on to Ukrainian
culture instead!

Give all that attention, funds, and
support to the culture of Ukraine—
a truly free European nation!
This is how you stop modern-day
imperialism and ugly colonialist
oppression from spreading!

Support
our demands to
the governments,
publishers,
and cultural
institutions of the
free world.

Russian culture kills. Do not support the aggressor in any financial way. As long as you keep funding Russian editors, creators, and artists, people will wake to the sound of sirens and go to work in bomb shelters. The art market is a part of the global market as much as the fuel and energy market (oil, gas, coal, etc.). Thus, any form of financial support directly funds the murders being committed by the Russian army.

Do not collaborate with any institutions of this terrorist state, even if they claim their opposition to “Putin’s regime.” Can a culture be great if its members murder other cultures? On March 16th, the Russian air force dropped a potent bomb on the Dramatic Theatre of Mariupol (the Dramteatr): 300 people died, and among them were many children. On April 2nd, in Bucha at least 340 bodies of killed civilians were found after the Russian army retreated from the town. Many of them had their hands tied and were killed by headshots. Over 100 cases of damage to Ukraine’s cultural heritage have been confirmed, while some towns have completely ceased to exist.

It is of prime importance to reconsider the rhetoric that permeated the Russian Empire, the USSR, and lives today in the Russian Federation. The legacy of these nations does not belong to the Russians alone, but to all the peoples who were forcibly encompassed in these supranational identities. To be born in the USSR, to work in the Russian Empire: none of those things make you automatically “Russian.” Museums as well as educational and/or scientific institutions must become a space for rethinking Russian imperialism.

Here’s a collection of links to petitions and appeals from Ukrainian culture influencers along with some articles on the role of the Russian culture as a tool of Russian imperialism:

Petition: Impose Cultural Sanctions on the Russian Federation
Oleksandr Holubov. Good Russians and Where to Find Them.
Daria Badior. Why We Need a Post-Colonial Lens to Look at Ukraine and Russia.
Volodymyr Sheiko. ’Cancel Russian culture’ as a Means of Survival.
Lia Dostlieva, Andrii Dostliev. Not all criticism is Russophobic: on decolonial approach to Russian culture.
On Dialogue While Bombs Are Falling: PEN Ukraine Addresses the Global Intellectual Community
Illia Levchenko. Decolonization and the Power of Absence or Why All Russian Culture Is Totalitarian.
Michaël Mélinard, Sophie Joubert. Boycott. Trois cinéastes ukrainiens montent au front culturel.
Appeal to Decolonize Russian Federation. 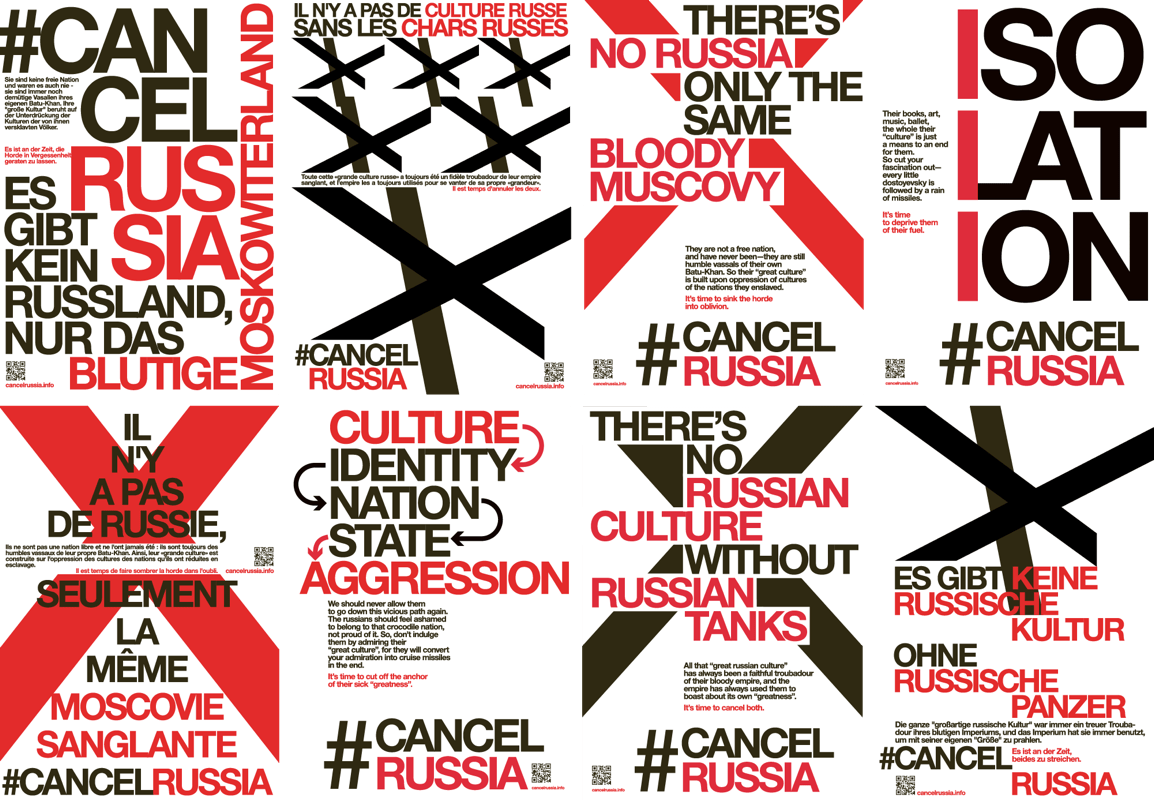 Download, print and put up those posters in your city. Print them big, post them far and wide. Posters are localised in English, German, Dutch, French, and Italian.